That’s what the feet tell about their health

Beautiful, well-groomed feet are an attractive eye-catcher, especially in summer. But not the look alone is crucial. On the feet can be read also possible diseases . So it is worth paying attention to your feet and, in case of changes, seeing a doctor early. 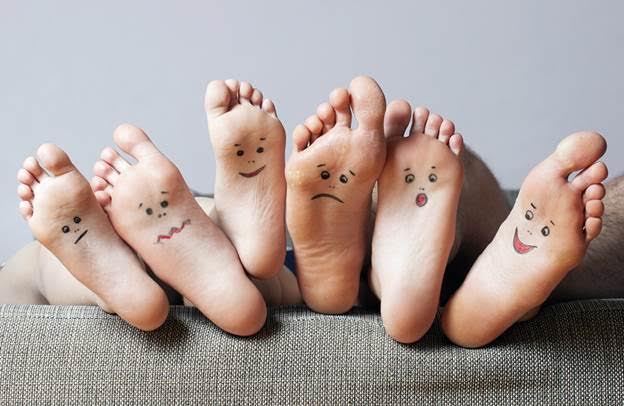 One problem women are particularly struggling with is Knickzeh (hallux valgus). It is one of the most common  foot deformities and can lead to severe pain.

This is behind the Knickzeh

The main reason for the disease are usually too high and too tight shoes. Affected are the big toes. These bend over the joint to the outside of the foot, while the tip of the toe tilts inwards. As a result, the second toe is displaced or even overlapped.

This malposition is often painful and also affects the  muscles  and tendons in the foot. These shorten and the muscles become weaker. This also wear the joints . In many cases, both feet are affected. A gentle posture does more harm than good. Because this way, other areas of the foot are unnecessarily burdened. Flat shoes with a sturdy sole create a remedy. On high heels, on the other hand, you should definitely refrain.

One annoying evil that many people suffer from is athlete’s foot. In this infectious disease, it is important to start treatment as soon as possible. The deeper the  fungus  penetrates the skin, the harder it will be to eradicate it. Still, many people shy away from going to the doctor when they discover typical symptoms like flaky, red, and itchy areas on their feet. Most of the time the toe gaps and the soles of the feet are affected.

Externally, doctors use so-called antimycotics, which inhibit the growth of the fungus and kill it. These are available as ointments, sprays and powders. Oral medications, such as those with the active ingredient terbinafine are only necessary if the fungal infection has spread over a large area.

The fungus can be treated with special varnishes from the pharmacy or treatment sets, including a urea-containing cream. The use of so-called antimycotics is conceivable. Ingested, the drugs prevent the proliferation of the fungus and kill off pathogens. Talk to your doctor, he will advise you individually.

Incidentally, frequent fungal infections may also indicate a weakened immune system or unrecognized diabetes. A visit to the doctor also provides certainty as to which cause underlies.

Pain in the heel are typical for  heel spurs

If the foot unexpectedly hurts, it indicates a heel spur. Almost every third person has him in the course of his life. The heel spur has to be thought of as an extra small bone that has subsequently formed on the foot. The ossification itself is common and does not cause any problems. Only when a tendon on the sole of the foot has become inflamed does it become painful.

The best therapy is the treatment of the calf muscles by a physiotherapist. The calf muscles are trained. The stretching exercises usually bring a short-term improvement. For the symptoms to disappear completely, they must be carried out over several months. Surgery is rarely necessary for heel spurs.

The most common symptoms of foot rheumatoid arthritis are pain, swelling and stiffness. The signs usually appear in multiple joints on both feet and should be taken seriously. Also, the gait can be affected. The toes can stiffen and deform so that hammer or claw toes can occur.

Anyone who observes such symptoms should consult a doctor. It must decide which treatment has the best chance of improving the mobility of the foot and, if necessary, initiate targeted rheumatism therapy.

When suddenly the joints hurt, especially on the big toes, many immediately think of osteoarthritis. But sometimes the cause is elsewhere. Behind the complaints can hide a gout. It is typical that the big toes are swollen and sensitive. Here, crystals are deposited on the joints and form small knots.

The first gout attack often comes at night. Often, months or years pass before the next attack. If these become more common, it can severely restrict mobility. With appropriate changes in the foot area, therefore, affected persons should immediately consult a doctor to clarify the causes of the symptoms and to initiate a targeted therapy.